After/during a performance evening on monday night the salonieres changed my image of a woman into a slightly different image of a beard woman. Slightly because the mustache was a thin and quiet theatrical looking piece of my own hair glued to my upper-lip. Even so it was so obviously not real I felt slightly different while riding home on my bike through the streets of Berlin that night. Heroic and courageous, nervous and  insecure about what to come. Until I went top bed I wasn't sure about wether I would sleep with my new itching face hairs or I would simply rip it off that night. But the curiosity about the reaction of my boyfriend and my daughter made me go to bed with that tickling hairy thing on my lip.
Well, their first reaction was quiet different from what I expected. First they were very ast 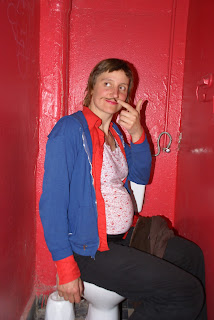 onished and speechless about my 'new' image, then he shouted out: 'Igitt' in disgust. My daughter pretty much said the same: ' Mamy, that is ugly put it off.' I thought that at least she would be fond of my masquerade.
I could have stayed in bed while my boyfriend would bring her to kindergarden, but then I decided- I have to show my new face at least a tiny little bit in the public. All the way to the kindergarden I was excited and nervous, but more like challenging the world, than fearing something.
We were much too early, so we sat down in some turkish Café. Interestingly most of the older, turkish men smiled at me, most of the Germans just ignored my beard image. The other kids just asked about my mustache and after I told them that I want to try out how it feels like, they were satisfied.
After that I sat in a cafè for a while drinking coffee with a friend, but nothing happened except some looks and that I got more and more used to it. Unfortunately I decided to go home instead of going to a big market, buying some fruits with my friend and experiencing the slowly growing transformation in my perception of myself and the reaction to my hairy face.
At home I just took some pictures before I took the mustache off- and immediately regretted that. Even though it was a only a small, theatrical looking mustache, wearing it for half a day broke my routine and my imagination of myself and my life. I don't really understand why, but that's the way it was. I felt like something new has to come or can come, especially something that alterates my family life which is way too traditional- more than I ever imagined it could be.
Muchas Gracias Salonnieres por esta experienca!!! I will do it again!
Posted by Les Salonnières at 24.5.11

Contemporary females portraits persist on representing its beauty by removing its wrinkles, hair or fat. The current parameters of femininity in Western models seek to establish as attractive those bodies which are soft, sexual and made-up. But, could we feel seductive and beautiful allowing ourselves to grow hair or without using make up? The ambiguity of gender that bearded women represent awakes us a fascination to play with the concept of feminity.